My girlfriend and I have been living together for sometime, we’ve lived in different countries and travelled together too. However today, “Hanging Laundry” became an issue. 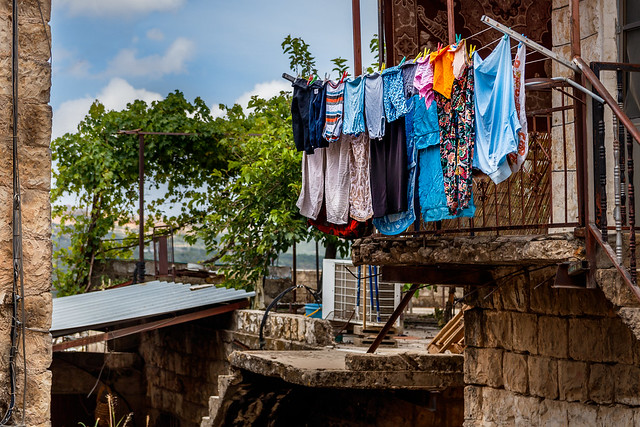 Thanks to Dany Sternfeld for the wonderful image (taken in Israel, look at his other great photos).

I’m mostly at home because I can work from anywhere and my girlfriend works at a company. This morning was atypical, she was running a little late. We had a quick breakfast. I was still sitting at the breakfast table focusing on my morning ritual, while she was walking around and getting ready.  Then said “Can you help me hang the laundry”.

The tone and way in which she said it, seemed more of a statement, rather than a question or request (feminists before you fire-up those blowtorches, read on).

So what’s the problem? She made her statement and walked off. Which could mean many things, but the way I interpreted it was that she wanted me to hang the laundry on my own.

We then stood there arguing over this matter for a couple of minutes (we’ve both never discussed it and so this new to us).

Let me first set the record straight. “Laundry” or “Doing the washing” depending where you are from, is everyone’s responsibility. More specifically, it is the responsibility of the legal owners of the aforementioned laundry.

However, to make things more complicated, the aforementioned articles lying in wait in the washing machine, were bed sheets, pillow cases and a duvet cover. They legally belong to my girlfriend, but I make shared use of them along with my girlfriend. We just happen to have joint custody… every night.  (I now see why lawyers get excited over such matters).

Tricky… this case, is not so simple. You see there are different circumstances, different opinions and different contexts. So some discourse is required (If you have an opinion, please feel free to leave a comment – I would be very interested and I think others would be too).

The default position of most men, especially those like me exploring their masculinity is, to say “Woman, hang the laundry!” because by no means am I… a house-man! What will be next? “breakfast is ready lovey lady”, “I’ll iron your skirt dear” and “Don’t worry about the dishes dear”… What the hell!

However, I suppose in many households, perhaps this is true where a woman just does all the work. After all, is this not a woman’s work? (feminists, hold… hold!)

Another way to look at this, is a question of priority. Shes running late, so I should hang the laundry (Now fellas, don’t grab those axes just yet, read on). Whether my woman thinks my morning routine is important or not, is irrelevant – I also have things that are important to me, to get done. So we both, have priorities.

In the end, we just hung the damn items up together… but my lady was not happy about it. I could see the smoke coming from her ears, eyes and nostrils! When she left, it seems a dragon had been let out, set free into the wide world. God help anyone, who gets in her way today!

The real problem is actually problem solving. You see I’m not angry about it, initially I was because since I’ve been home and since she started working (at a company), she’s sometimes been dabbling her hand at the condescending table. Not always, but a couple of times and enough for me to take notice.

I can only sympathise with countless woman (and men) who stay at home, taking care of the house, children, etc. For they too take the burden on, everyday to help their own family unit – but it is not obvious as it seems, nor the thanks thereof.

Back to the problem. You see disagreements are always lurking around the corner. There will always be problems and problems… need solving.

But when any person treats another with disrespect – be that in tone or otherwise, we need to stand our ground, but do so respectfully. It is important not to be angry with the other person, rather to focus on the problem. Unfortunately my lovely lady had to leave because she had to been on time, at her company.

So as I watched people jump out of the way and the tar of the road melt in a trail behind my lady… I ping’d her a message and called her out on her “respectful” behaviour and so, left it like that.

Eventually, she replied “lets discuss it later this evening” (I was sure I could feel the keyboard being beaten with each keystroke). I did not reply, but curiously she was wondering… and beat out a few more sentences. I’m Buddhist in a way, when people treat me in a manner I see as negative, I treat them back the same way.

So I replied “lets discuss it later this evening”. I could feel her keystrokes get lighter, more delicate, more feminine. I know her and she knows me, we both don’t like problems – nor to be distasteful to one another.

You see, I think to myself whenever in a difficult problematic situation, “What can I learn? What can I see differently? How can this be an opportunity?”  – yip all in one sentence.

I ping’s her a longer message, stating that I was not angry and focused on the problem. But I did not want her to be in a mood because you see we both need energy to face the day. Both of us need to do what we need to do. Having these lingering feelings, wasting energy on them when we need to divert and allocate energy where it is truly needed – is of paramount importance. I proceeded to tell her, we needed to discuss, defuse but as we can’t solve the issue now, agreed the need to discuss it later.

But it was important for me to be a man, to let her know its OK to have disagreements, that I have my boundaries with regard to respect. That I still love here and think shes the most wonderful woman in the world.

I could feel her mood change, the love and tenderness in her tone. I could also sense a relief in the both of us because we don’t need to have persistent, lingering and negative emotions. I do think we could have just spent the few minutes hanging the laundry both together – instead of arguing. And we still need to discuss and solve this problem together later, but we both can be happy for the moment and focus on our day.

So as I sit here looking at the melted tar dry and people walking about, normally, naturally. I can’t help think, this is all natural, normal and I’m glad in the end, we all… look naturally respectful again.

For men who seek to be more man-ly (LGBT relationships too). It’s a balancing act and I thought this was important enough to highlight the book “No More Mr. Nice Guy!”, so posted on Instagram too.

Now ladies and gentlemen, you may get out your flamethrowers and axes… we all would like to hear, how you think this problem could be solved.